It’s Not Controversial, It is Necessary

It’s Not Controversial, It is Necessary

This month is Suicide Awareness Month.

As many of you know, the seed of inspiration for Citizen Yoga was my sister who committed suicide in 2007.

Last week, while perusing Facebook I came across a post made by a young girl who lost her mom to suicide a year ago. My first thought was, I’ve been there; then how far I’ve come, and how far away it all seemed from me. For a while, after my sister, it felt like suicide was everywhere, like a monster underneath the bed. 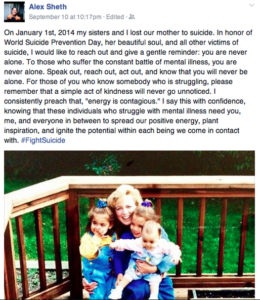 I was silly to assume that suicide no longer lurks in the corners of my mind, my room, my house, because almost days after that illusion I unfortunately realized that it was just lingering next door.

Last week, I came home to my apartment building in downtown Detroit to two police officers in the elevator. No one could give me a clear answer as to what was happening, although the scene felt eerily familiar. All I was told was that “Everything had been taken care of,” and that nobody was in immediate danger.

Thirty minutes later, I found out that my next-door neighbor had taken her own life. The monster was back – the trauma, the anxiety, and the clarity of purpose that accompanies tragedy. An email was sent out, mourning the untimely death of this young woman – yet without mentioning the real issue at hand.

If suicide is not discussed, it does not mean it will go away. When is suicide not going to be controversial, or something we sweep under the rug because of our discomfort? We lapse into our daily frustrations and distractions, becoming phone-addicted islands unto ourselves. As somebody directly affected by suicide, I believe we need to fight for this and become aware of its immediate presence.

When did we all become strangers?

Was it always like this, or has the problem been exacerbated due to social media? Even on social media, we create and promote a self-myth, which is not our true self. Whether you are projecting a positive image or a negative icon, it is not your real person. Because of that, we started to fear broaching intimacy with other humans (more on this soon – social media post is on its way).

I live in a newly converted apartment building, with beautiful amenities full of common spaces and gorgeous features.  Yet when people walk in the front door, we don’t even make an effort to hold the elevator for each other. Having so many beautiful spaces doesn’t change the fact that at the end of the day, we walk into our apartments, close the door, and are alone.

I’m not saying that the lack of the social niceties in the building lead to this girl’s decision to end her life – not at all. But it’s jarring when we take a step back and recognize that we are all so incredibly consumed by ourselves, living in our self-constructed silos, that sometimes we cannot see what’s right in front of us and in my case, what was next door.

This is where the power of a yoga practice alters the way we connect to ourselves and others.  In yoga, we learn how to support ourselves, physically, emotionally, and intellectually. Once we are practiced in supporting ourselves, then we might be better able to recognize when our friends and neighbors could use a hand.

In yoga, we have to physically support ourselves by inspiring ourselves to move beyond what we think we can; emotionally, we learn to surrender to the moment, and breath through it; intellectually, we use reflection in our practice to become more aware of positive and negative tendencies that are usually those we miss due to the busyness of the grind.  As our practice grows stronger, so do our receptors to the world beyond ourselves.  When we become more attuned to ourselves, we notice more things about the world in which we live. Maybe then we can react quicker when a friend hasn’t called in a while, or your brother hasn’t left the house, or your mom has suddenly gone quiet.

The point of this practice is to shorten your feedback loop, so it doesn’t take as long for us to recognize that the person next to us needs support. And that’s the basis of yoga – learning to serve. The idea of looking inwards and focusing on people around us takes practice, and commitment, and patience.  When we are more attuned to the ways we can support ourselves, we can recognize that need for someone else around us more quickly. We’re better suited to respond and can make better choices. We need to be more friends than neighbors.

If you feel inspired, Common Ground Sanctuary is amazing resource for people who need more support.  Check out their website to learn more: http://commongroundhelps.org

Half & Half is Not Better than Whole